Frances McDormand plays Mildred, whose teen daughter was murdered and raped. After months of no leads in the case, Mildred (McDormand) grows frustrated. Thus, the opening of the film we see decrepit billboards on an old country road. Then, she decides to take action and pays for these three billboards to say, “Raped while dying” then “and still no arrests?” and finally, “How come, Chief Willoughby?” This bold message gains a lot of attention in the small Missouri town.

Mildred’s provocative billboards and what ensues don’t give the audience a clear hero to root for, but instead the movie takes us through the gray areas. We see a small town with lots of violence, racism and homophobia. However dark moments get, the film doesn’t linger in them. In fact, the violent, hateful incompetent cop Jason Dixon (Rockwell) is the most hysterical character. The cuts from emotional to humorous and back again are a bit jarring. Somehow, it works. It keeps the film about murder and rape and violence light. 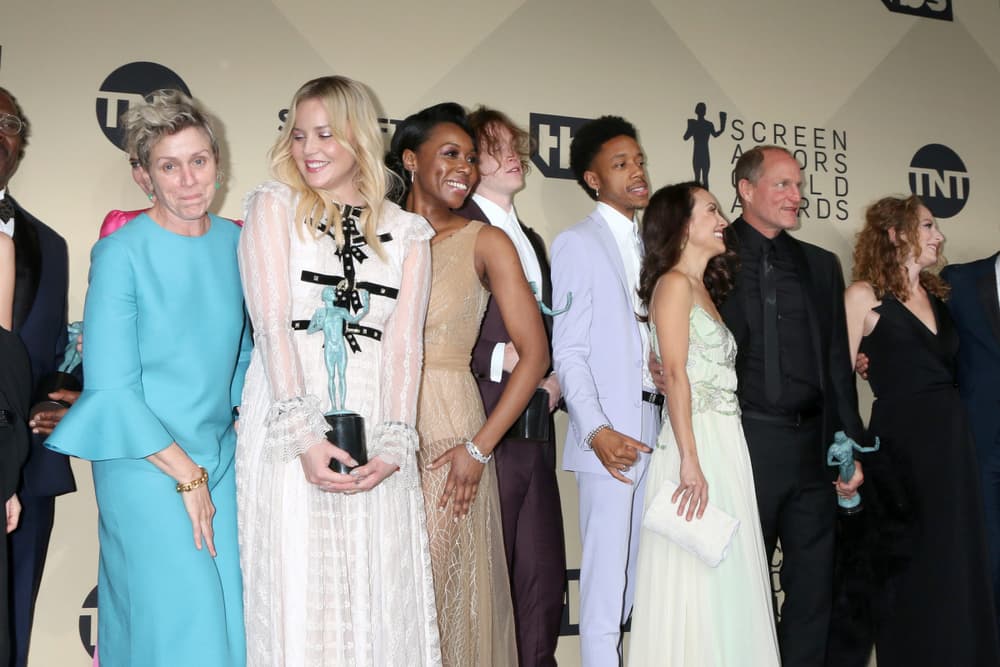 There’s no question about how Sam Rockwell won an Oscar for his performance as Jason Dixon. Everytime Dixon appeared on screen, it was a guaranteed laugh, even in seemingly inappropriate and intense moments. Although, he wasn’t the only funny character. Even the grieving Mildred had such sass. Her satirical and witty remarks always brought comedy to the darker situation at hand. Apparently, McDormand used John Wayne as an inspiration for the character Mildred and the way she strode around ready for battle and any action. Though, Mildred was able to show a tender side in the blink of an eye. Oh let’s not forget Woody Harrelson as Chief Willoughby, who somehow is able to inspire even Dixon for the better.

Just a side note, we saw the murdered daughter Angela in a brief flashback. If she looked familiar to you, that’s because the actress Kathryn Newton also plays Abigail, the daughter of Reese Witherspoon’s character, on Big Little Lies.

Of course, what’s an award winning film without a little controversy? A lot of the backlash came from the portrayal of both Peter Dinklage and Sam Rockwell’s characters. For Dinklage, his character was often berated as a ‘midget’ and people felt his dwarfism was utilized for humor too often. Then, with Sam Rockwell’s character, many felt this violent, racist cop was redeemed too easily.

In an interview with Entertainment Weekly, director Martin McDonagh refutes this claims. He said, “It mostly comes from the idea of Sam Rockwell’s character, who’s a racist, bigoted asshole, that his character is seemingly being redeemed, maybe. I don’t think his character is redeemed at all – he starts off as a racist jerk. He’s the same pretty much at the end, but, by the end, he’s seen that he has to change. There is room for it, and he has, to a degree, seen the error of his ways, but in no way is he supposed to become some sort of redeemed hero of the piece.”